Yesterday Gil Tucker from Global TV was at ACAD to interview a few of the artists from ArtaWEARness XI. Check out the video here!

“In small doses melancholy, alienation, and introspection are among life’s most refined pleasures.”
-Rebecca Solnit*

The dictionary defines it as:

-standing or waiting around idly or without apparent purpose

-traveling indolently and with frequent pauses

For my Fibre Senior Studio we were assigned the task of loitering in a place where we have never spent time. I decided to head towards Inglewood as I had always wanted to explore that area, but had never taken the time to do so. I said goodbye to my friends, who wished me well, and waited for the #1. Sitting, waiting for the bus, I realized that in that moment I was there for no other purpose than to just exist in that place.

I got onto the bus, not really knowing when or where I would be getting off. Rather than being set on any particular destination, I focused on my surroundings. In the seat in front of me a dad sat with his son in a stroller. The baby was drinking out of a mason jar, which I thought unusual, though environmentally sensible. Across the aisle, a woman held a Tommy bag in her hand. The stop outside the Tim Horton’s downtown brought an influx of passengers. A man sat beside me with a red bag on wheels, and a package from Tim’s. I could smell a combination of cigarette smoke and toasted sandwich. While on the bus, I wondered, “What if someone asks me what I’m doing here?” I wouldn’t be able to say what, unless I told them the purpose of the assignment. But, then I realized that it isn’t typical for people to question what other people are up to. Most of us just, sadly, continue on our own independent course, not stopping long enough to acknowledge where others are at.

Not too much longer and I was in Inglewood. Once I stepped off the bus, I felt like I was entering a foreign place. What would I do with myself for the next little while? I pulled out my camera, and, feeling like a tourist, took some pictures. I noticed some didactic panels along the sidewalk, and stopped long enough to read them, wondering how often they are actually read by Calgarians who frequent the area.

I stop near a Persian rug store to take note of the smells I’d experienced. Greasy food from a cafe, incense from the carpet gallery, cooking meat, perfume. As I write this down, a man walks by, talking about

lavender and cinnamon. I look up and notice a man dressed all in black with a studded leather jacket, and bleach-streaked hair standing across the street. He doesn’t seem like he’s up to much. I wonder if he’s also loitering. Or, maybe he’s just waiting. It makes me wonder what type of people loiter. Most people pass by, too busy shopping or visiting with friends to linger for the sake of lingering. A couple minutes later, and the man across the street walks a couple doors down into a pub. I guess he wasn’t loitering. I continue on a little farther down the street, taking my time to notice things that I would otherwise pass by unaware. At one point I pause, noticing that the string of clear Christmas lights that wrap around the sign poles are actually turned on in broad daylight.

There’s a wooden schoolhouse hanging in a small potted tree. A couple pots down, a Christmas wreath hangs in another tree. On the other side of the street, a sparkly heart is stuck to a garbage can, and a couple blocks down, a similar heart is on the streetlight box.

Along the side walk, I stop to take a picture when I see a familiar face pass by me. It’s someone I recognize, but don’t really know personally. It makes me flustered for a second, and self-conscious of what I’m doing. Instead of taking the photo I intended, I pretend to check the settings on my camera and take a picture of the ground. 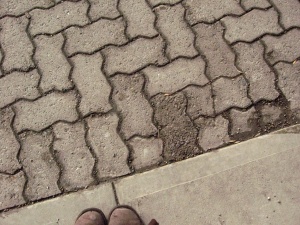 The picture I intended to take was of a very flat bus stop bench. It makes me think of how many public spaces are designed to discourage loitering. If people are uncomfortable enough, they won’t linger and disturb the non-stop pace of the city.

After spending time strolling, pausing, lingering, collecting photographs and ephemera, I decide I will soon bring my loitering to an end. The wind is getting to me, and making my hands cold. I take a look in Pith Gallery, then head back down the street to Cookie Mama and get a latte and Yellow Submarine cookie. I take my snack outside to the bus stop. Not too much later, the #1 pulls up and takes me downtown. My loitering adventure is finished.

*from Solnit, Rebecca. “The Solitary Stroller and the City.” Wanderlust: A history of walking. New York: Penguin Books, 2000.