I have a show up at the Marion Nicoll Gallery. It felt like being back in school again, working to get everything finished. The show runs from Oct. 3-14 with the reception on October 13 from 5-7pm. 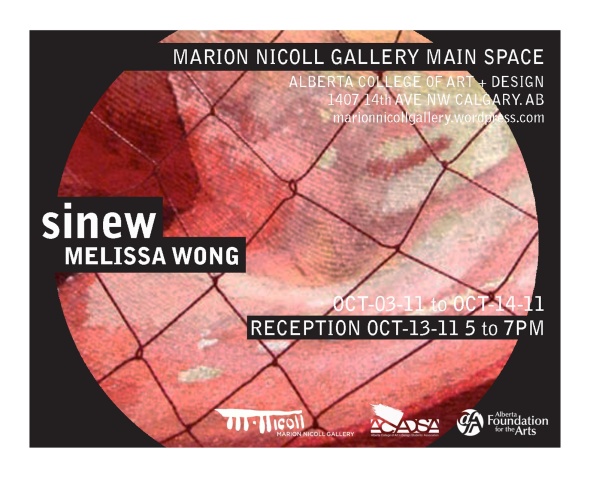 Sinew explores the body as textile, and plays with the idea of representation through the use of traditional textile processes. The body is depicted by the accumulation of individual strands of yarn, speaking to the intricacy of the human body, and the intervention of modern medicine. Like tapestry weaving and lacemaking, medical and surgical procedures require knowledge and skilled handwork as the body is cut, manipulated, and stitched.

Just got back from an awesome trip on the West coast. Along the way, I got to stop off at the Silk Weaving Studio on Granville Island, and saw these cute little guys. Here’s a video of them in action.

The second unfinished project I’ve successfully finished is a little felt sculpture I started during a workshop with Marjolein Dallinga of Bloomfelt. The workshop was during an extra-busy time of school, so after the workshop was done, I never got around to finishing the work because I needed to focus on finishing school. My sister helped get me motivated to finish this one. She asked if she could cut some of the circles, and after watching her for a couple minutes, I wanted to finish it myself. 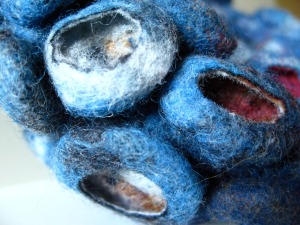 I’ve realized I have a problem. I like to start new projects, but have difficulty finishing them.

This dawned on me when I was cleaning/organizing my studio space at home, and came across several unfinished projects. It’s interesting to think about what made me abandon these projects in the first place. Maybe I just got busy with other things, or perhaps I thought of an even better idea that I decided it’d be pointless to finish the current one first. Whatever the reason for not finishing, I’ve resolved to finish as many of my unfinished projects as possible.

This reminds me of a project my mom worked on when I was a kid. We went to the craft store and bought a couple of those wooden knick-knacks to paint. I finished mine, but my mom didn’t (maybe procrastination is hereditary). Ironically, her wooden work was a little sign that read “Begin, the rest is easy.” Obviously, the rest isn’t always easy.

The first project I have now successfully finished is a painting I started last summer. Now I just need to think of a title. 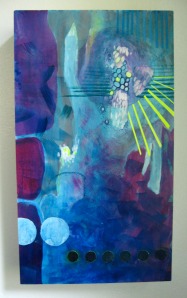 Life post-graduation has been an adjustment. Getting used to a new schedule, trying to figure out what to do with free time, organizing the chaos that has developed in my house over the past four years. Finally, I’m beginning again.

I’m beginning to see how art-making will fit into my life. A couple of weeks ago I picked up my new old loom from ACAD, a graduation present from my mom. It took twice as long to reassemble it as it did to take a part and load into my vehicle. After four attempts, I got it put together and now feel a lot more familiar with my new loom, a Leclerc Gobelin-style loom. 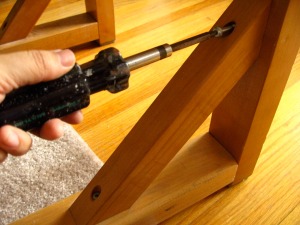 I wound a new warp in my kitchen…a little different than using the warping mills at school, and a little more time-consuming. It makes me appreciate what I had access to during my time at ACAD. 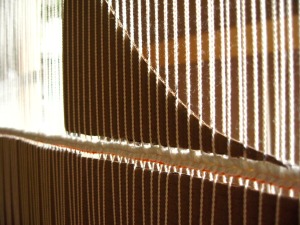 Now, it’s all set-up for my next weaving, which will be a part of my show at the Marion Nicoll Gallery in the fall. This one will be with two sculptural tapestry elements that will be connected with a tube of needlepoint lace. I’ve gotten this far, and realized I don’t have a tapestry beater, so I’ll be using a fork in the meantime. 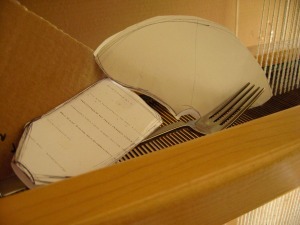 Today I was blogged on Mackenzie’s awesome ArtClothText blog. He did a three part feature of ACAD graduating fibre students’ work at the grad show.

Yay! After months of figuring out how to make my site (with many wasted hours and failed attempts), I’m finally successful. Hopefully I will now be able to update it without somehow losing what I’ve got. You can check it out at melissawong.ca.